I first met Dave McCoy back in 1999 at an Ernst & Young awards dinner. As the founder of the Mammoth Mountain Ski Area in central California, he was a regional winner for the Ernst & Young prestigious Entrepreneur Of The Year (EOY) award.

As we got to chatting over dinner he told me how he started the ski resort and had to build up the local infrastructure like the roads and the fire house to support his growing business and local economy. As I remember, he brought up his annual motocross event, without me asking about it. He told me that he was very proud of bringing together top motocross pros from Southern California to his annual MX race at Mammoth.

“I rode motocross until I was in my 80s, and had a lot of fun during the Mammoth races every year. I’d say we built it into one of the best races in the country. It offers something for everyone–boys, girls, adults and pros. Not many other races can make that claim and we’re very proud of that!” – Dave McCoy

For this monumental contribution to the early years of motocross, Dave McCoy is being honored as the 2015 recipient of the Edison Dye Lifetime Motocross Achievement Award.

Back in 1968 Don Rake and some friends decided to put on a motocross in Mammoth Lakes, California. They built a world-class track 8,000 feet up in the Sierra Nevada Mountain range. Dave McCoy came along and offered the backing of his Mammoth Mountain Ski Area and the rest is history.

Every summer racers have flocked to Mammoth Mountain for this classic event. It is the oldest continuous running motocross in the USA. The track has changed a little over the years, but the fun hasn’t. Year after year, Dave McCoy was instrumental in the continuing development of the “destination” races at the annual Mammoth MX.

Many of the top racers in the world have honed their skills at this event. There have been some epic battles over the years and many racers have made a name for themselves on this track. Little did anyone of present day know that Dave created a fitness training center for dirt-bikers at his ranch in Bishop, CA. He also built a motocross track right in his yard, so that everyone could ride there. 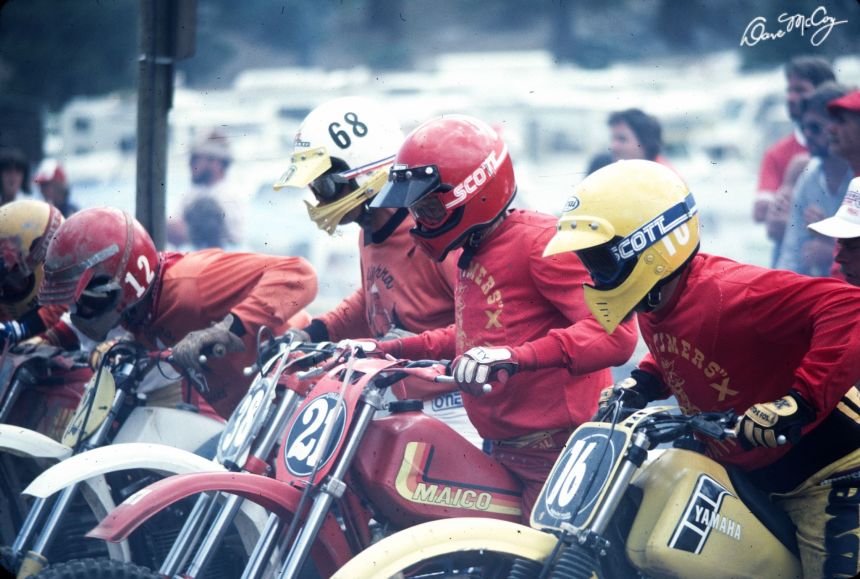 “I raced in the Mammoth Motocross for 30-some years. I took on the young guys and did alright!” – Dave McCoy

Mammoth Mountain Ski Area is a large ski resort located in Eastern California, along the east side of the Sierra Nevada mountain range in the Inyo National Forest. Mammoth has more than 3,500 acres (1,400 ha) of skiable terrain, serviced by 28 lifts, including 2 gondolas. The area has 3,100 ft (940 m) of vertical, rising to an elevation of 11,053 ft (3,369 m) and enjoys a long ski season.

In 1936, McCoy took a job as a hydrographer for the Los Angeles Department of Water and Power, which involved skiing up to 50 miles per day in the Sierra Nevada mountain range. While being a hydrographer, he joined the Eastern Sierra Ski Club. At age 22, he became the California State Champion in skiing.

In 1938, McCoy got a permit and set up a primitive rope tow using parts from a Model “A” Ford truck on McGee Mountain, near US Highway 395. He went to the bank, attempting to acquire an $85 loan to set up a permanent rope tow. The bank turned him down but the bank’s secretary, Roma, urged the bank to give him that loan. A few years later, McCoy would marry Roma and the two would raise six children together. By the early 1940s, the climate started to warm up, however, and the snowfall on McGee Mountain was not as heavy as it had once been. It was suddenly not an ideal location for skiing anymore. Remnants of McCoy’s original rope-tow can be spotted, and the site is marked with a historical marker sign along the current Highway 395.

McCoy noticed that the snow was better at Mammoth Mountain, where he set up a rope tow in 1942. The Forest Service decided then to offer, for bid, the right to operate a ski area on Mammoth Mountain. No one bid on this permit, including McCoy, who didn’t have any money. In 1953, the Forest Service gave McCoy the permit on the condition that he develop the mountain as a ski resort. A ski lodge followed in 1953, and the Mammoth Mountain Ski Area incorporated in 1955. McCoy struggled to develop Mammoth. The “lodge” was actually only 12′ by 24′, had a dirt floor with an outside toilet, and served snacks. The McCoy family used it as a home during the early years of Mammoth.

McCoy went to the bank again for a loan of $135,000 to build a chair lift. Again, he was turned down. McCoy eventually got a used chairlift. McCoy and a small group of skiers, had to work very hard and dig holes, mix concrete and install the lift on their own by Thanksgiving 1955. By 1973, under McCoy’s leadership, the ski area grew to 14 double-chairs, and a second base lodge was built. McCoy bought a small airline to fly a few skiers from Burbank, California to Mammoth. The growth of the ski area led to growth of the town of Mammoth Lakes, California, which incorporated in 1984.

In the 1990s, Alpha Airlines briefly flew from Los Angeles to the small Mammoth Airport along Highway 395. In the first decade of the 2000s, Horizon Airlines, began to offer seasonal service from Los Angeles, Reno, and the bay area to Mammoth. McCoy faced adversity in growing the ski area: drought in 1958-59, the 1973 oil crisis, and only 94″ inches of snow during the 1976-1977 season, the worst in Mammoth’s history.

In 2005, McCoy announced that he was retiring after running the ski area for 68 years. Mammoth Mountain Ski Area was sold to Starwood Capital Group in a deal that valued Mammoth at $365 million- a far cry from the $135,000 he borrowed in 1953 to build the first lift. He continued to ski until 2008: he has stopped temporarily due to a knee replacement.

McCoy currently enjoys traveling in the eastern sierras driving an ATV. He has always enjoyed photography and that is what he does today. His mission is to take pictures of places very few people have even seen. Dave’s pictures can be bought at local stores in Bishop and Mammoth and other local towns. All of the proceeds go directly to the Mammoth Lakes Foundation, which helps develop education and the arts in the Eastern Sierra. “The family and the community were always a big part of our success, as they helped play in the big sandbox as well,” McCoy says. “It shows that no man does anything alone. Now, my camera’s eye keeps making the Eastern Sierra a place for all of us to enjoy.” 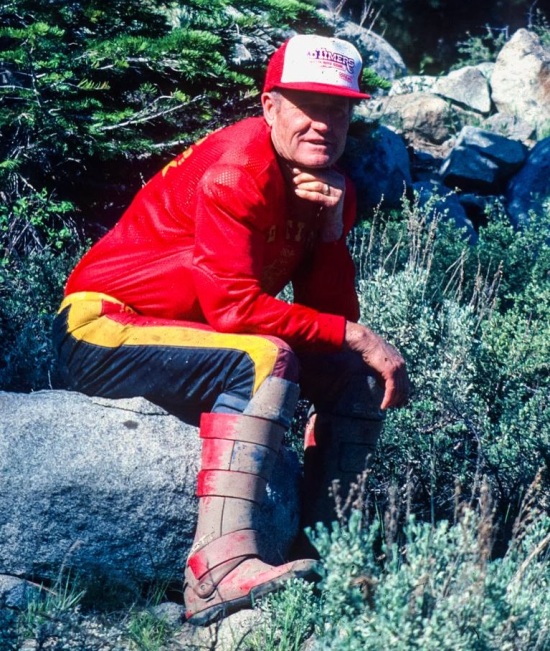 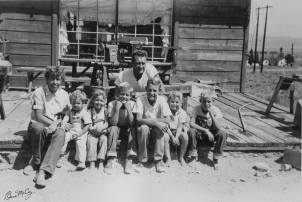 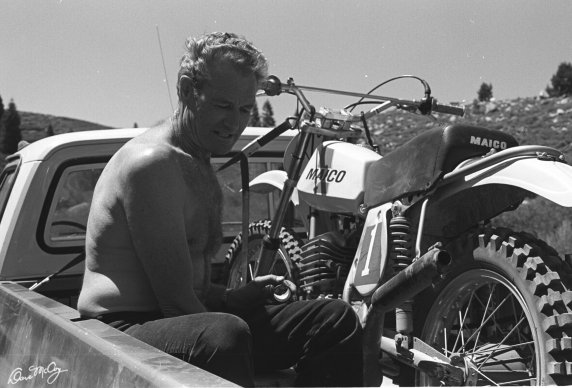 About the Edison Dye Motocross Award

Though motocross competition can be dated back to the 1920s in Europe, the sport which featured natural terrain tracks and long motos had never been practiced in America. In the 1960s Edison Dye ran a business that set up motorcycle tours in Europe. It was while leading one of these tours groups, that Edison was exposed to the sport. By the mid-1960s, European brands like Husqvarna, CZ, and Bultaco were the machines of choice and these motocross mod­els were not being imported into America. Dye loved the sport he saw, although he was not a racer him­self, and most importantly, he saw a business opportunity. Edison convinced the Husqvarna factory to let him bring in a couple of bikes with the potential of being the Husqvarna importer for America. The year was 1966.

In the fall of 1967, Edison set up the first Inter-Am series, which hosted the top European stars including Torsten Hallman, Bengt Aberg, Roger DeCoster and Joel Robert. Even though the American riders didn’t have a chance against the experienced GP veterans, they were quick studies and the Euro stars were willing to teach them the basics of motocross. Torsten Hallman even conducted motocross schools to help the American teenagers. Motocross machines sales and purchases of the unique apparel worn by the stars took off at a rate that was, and still is, unprecedented in any motorsport.

Now Dye is known as the “Father Of American Motocross” and The Edison Dye Motocross Lifetime Achievement Award is a prestigious award given to some of the people who made the largest impact on the growth of motocross in America. The awards ceremony takes place at Glen Helen Raceway in San Bernardino, CA. Started in 1997 by motocross legends Tom White and Irving Feldkamp, the award has honored incredible recipients that have forever left their impression on the sport of motocross. Winners are nominated and chosen by Tom White, formerly with the White Brothers. The awards ceremony takes place the first weekend of November during the MTA World Vet MX National at Glen Helen Raceway.

Winter Survival Camp
– Educational program at Ohio State University
– We traveled to Lake Superior, Upper Peninsula Michigan
– We skied into a State Park and camped for 4 or 5 days
– One night it got so cold, about (-14 degrees, below zero) that the park ranger came to check on us 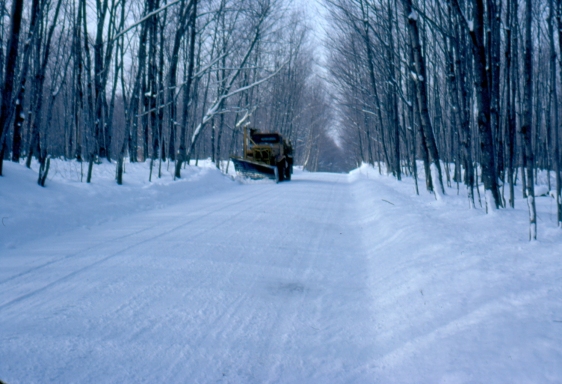 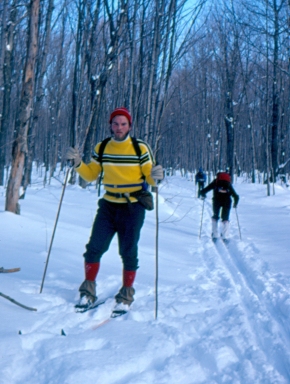 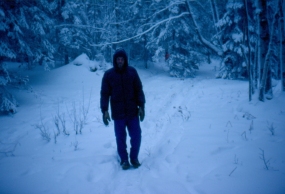 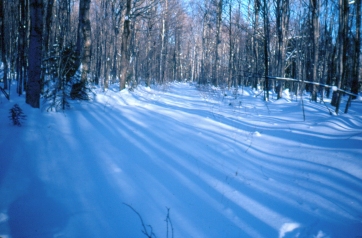 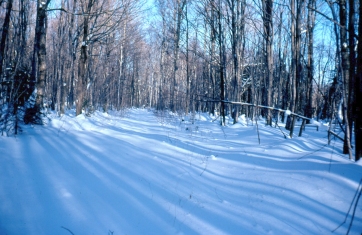 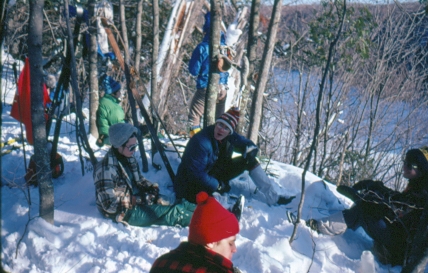 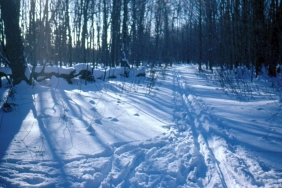 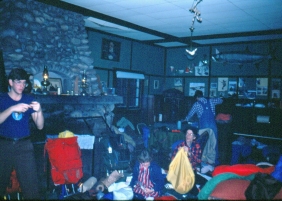 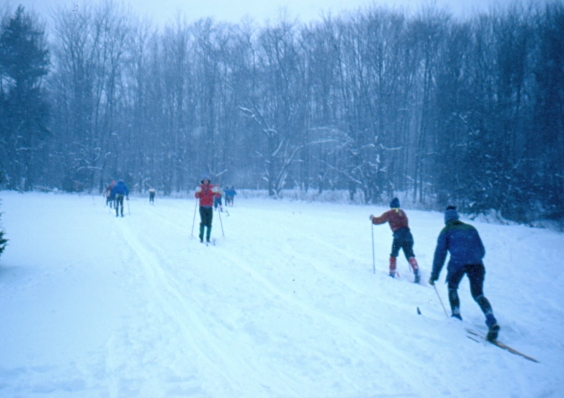 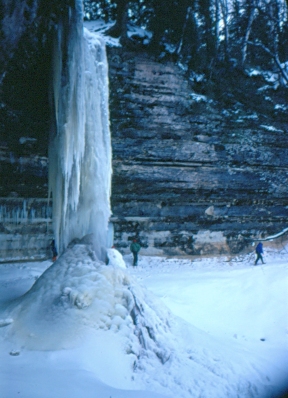 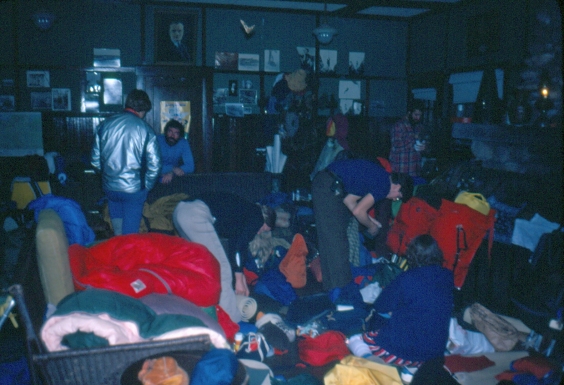 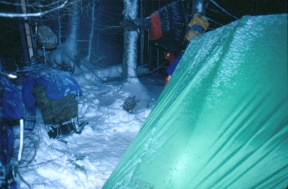 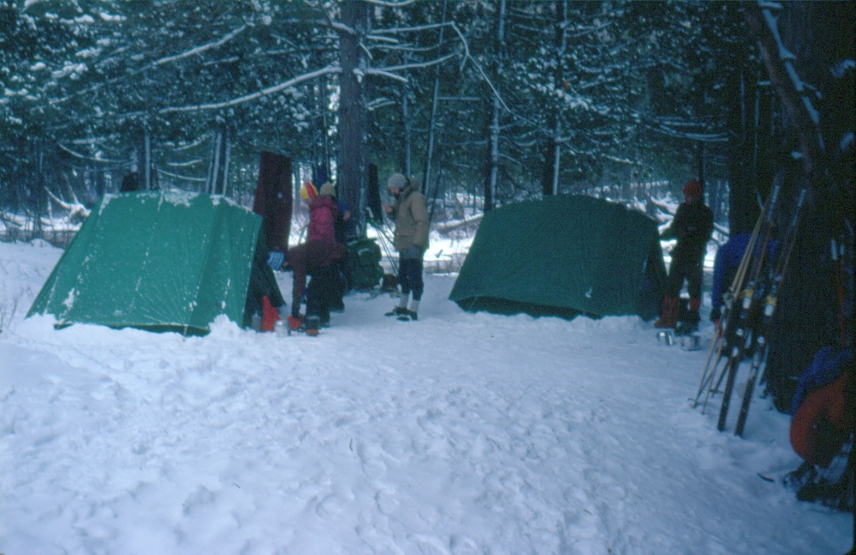 This bike was their first “production” big-bore motocross bike. And this bike was a rocket! It was really pipey, but when it was on the pipe, it was fast! I think it got it’s powerband from the road racing days. I was working as a business consultant with the importer and Derbi the manufacturer. I was offer the chance to race this bike around the mid-west USA. I tricked mine out a bit more. I was also working with M. Robert plastics from Italy. I got all the latest plastics from them! 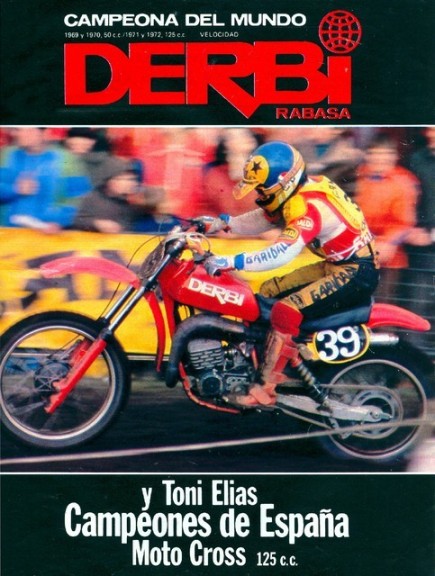 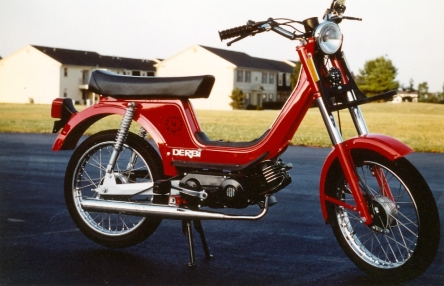 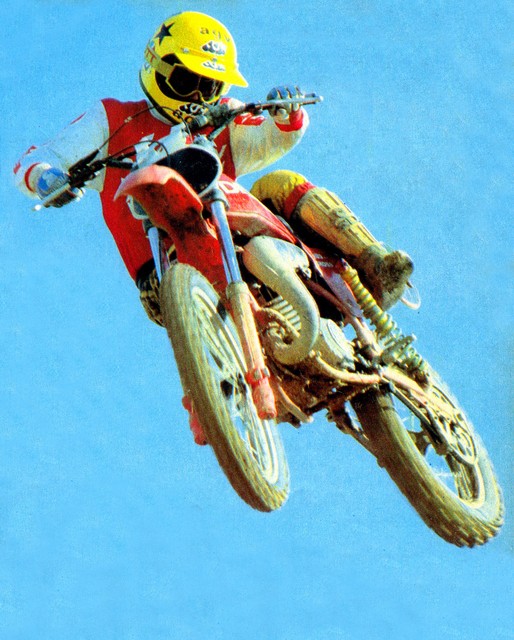 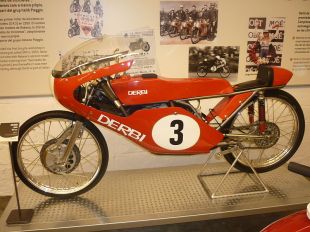 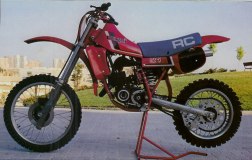 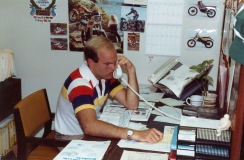